I recently spent a week in Mexico, with stops in three states: Michoacan, Jalisco, and Guanajuato. Starting in Guadalajara, I ended in Leon.  I had never visited Leon before, though I had been through the airport multiple times during visits to nearby Guanajuato.  I had heard good reviews of Leon’s downtown (Centro) and the nearby Templo Expiatorio.

The Templo Expiatorio is large neo-gothic Catholic Church that was completed in 2012.  Construction began in 1921, so it took over 90 years to complete.  It’s a beautiful building with massive bronze doors, beautiful stained glass, and wonderful architecture.  It is well worth stopping in Leon to see.

I had decided to time my visit with a full moon, and was in Leon for two days where the moon would be nearly full, as well as rising right after sunset. I used a tool called the Photographer’s Ephemeris to look for a suitable place to take a photo of the Templo with the rising moon.  I would need to be above other buildings with a clear view of the Templo, and the angle between the church and moonrise needed to be correct.  It looked the Hotel Real Rex, which is eight stories tall, would suffice.  I booked a room for two nights.

When I arrived in Leon, I checked in at the hotel and asked for a room with a view of the Templo. My plan had been to take photos through the windows, which isn’t ideal due to reflections or dirt.  When I explained what I was trying to do, the staff gave me access to the roof!  So I had a perfect place to take photos from.

The first night I was there, it was quite cloudy, but as the sun set, the clouds were breaking up to the east.  About 15 minutes after sunset, the sky was deep blue, and the moon finally began poking out from behind the clouds.  I took quite a few photos as the moon rose, but I think I like this one best: 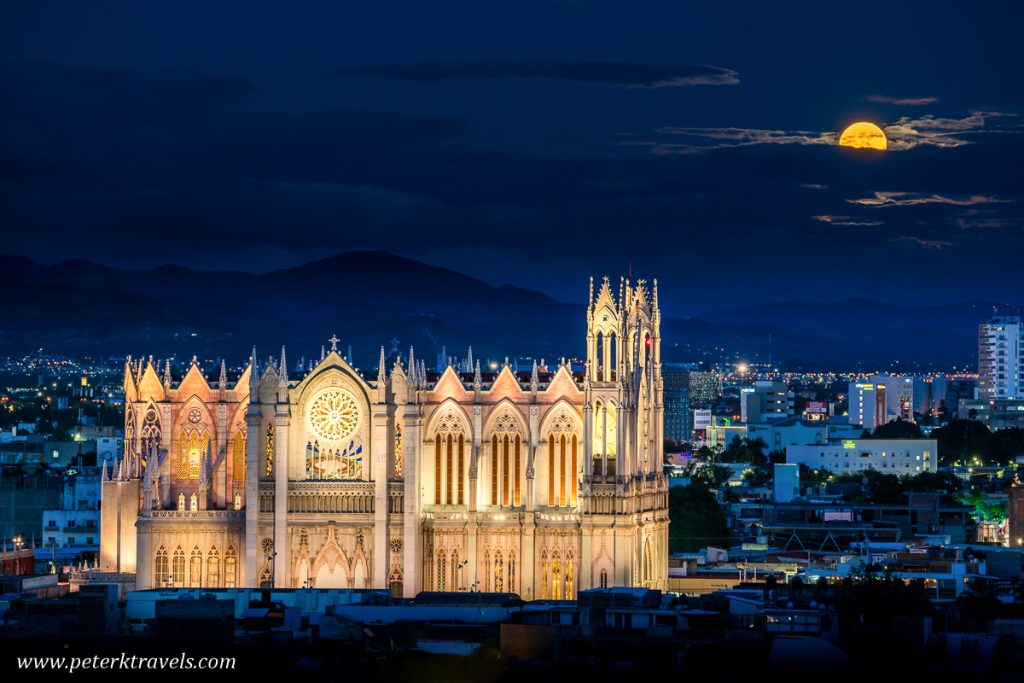 Photos like this one can be difficult to take.  The moon is incredibly bright — think of trying to take a picture of a lit flashlight in a dark room.  Often the photos are overexposed, and any foreground elements are lost.

There are ways around this.  One way is to expose the photo for the moon, which means most of the rest of the photo ends up dark.  Another way is to take two photos — one with the moon properly exposed, the other with the church properly exposed, and combine them in Photoshop, blending them together.  I am not very good with Photoshop, so I prefer to use the first method.  Once the photo is taken, it does need to be edited.  The photo editor is used to raise the exposure on the foreground, without over-exposing the moon.  Some cameras, including my Sony, have a very large dynamic range — allowing this to be possible.  Some smartphones can take photos like this as well.  They take multiple images and “stack” them together to create a proper exposure.  Some photographers may also use filters attached to their camera to darken the sky (and thus the moon), while leaving the church bright.

The second night, the moon rose well past sunset.  I’m still working on those photos, you may see more in another post.