In February 2016, I visited the Mexican state of Morelos and the town of Tepoztlán.  During my day in Tepoztlán, I wanted to climb to El Tepozteco, a small pyramid built on a peak of the Sierra de Tepoztlán.

I started my day in Taxco, needing to get first to Cuernavaca, then to Tepoztlán.  My goal was to be hiking up the mountain by noon — a late start, but it would take that long to arrive.  The first bus out of Taxco to Cuernavaca was full, and I had to wait for another one.  Once headed toward Cuernavaca, I figured it would be an hour or so until I arrived there, at the Estrella Blanca station. When I arrived, I left my large bag at the guarda equipaje there, and walked from the Estrella Blanca terminal to the market terminal, catching a $23 peso bus to Tepoztlán.  An hour later, I had arrived.

Despite delays, I was still on schedule, and walked toward the mountain.  The route is signed well, and at some point, you can see the pyramid from the street. 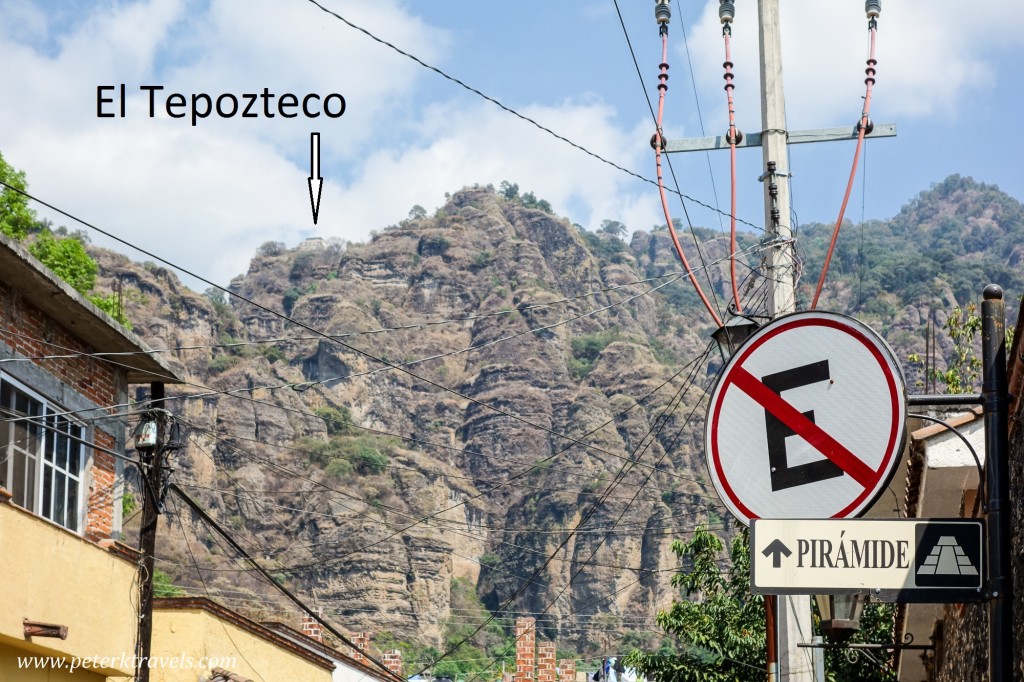 Continuing along, you finally reach the end of the street, and start heading up a broken trail.  At the trail head, a sign indicates a 1.3 mile or 2 kilometer hike up, taking approximately 45 minutes.  It suggests taking frequent breaks — I agree. 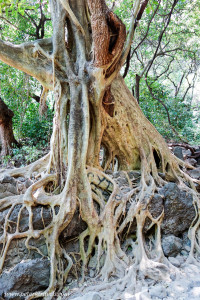 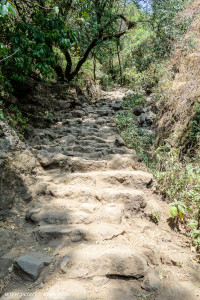 The path up was mostly dirt and rock, although there were some areas where stairs had been put in.  The footing was pretty good, though it would certainly be slick on a rainy day.  Whether due to simply being tired, or perhaps not eating enough, or even altitude, this climb really kicked my butt.   I was stopping regularly to catch my breath, when in the past this wouldn’t have been typical.  Of course, stopping gave me a chance to take a few photos, including one of a really interesting tree (left)…so I’ll use that as an excuse.  The photo to the above right gives an idea of what the path looked like.  Gaps in the trees gave glimpses of the nearby rock formations, but it was not possible to see the pyramid. 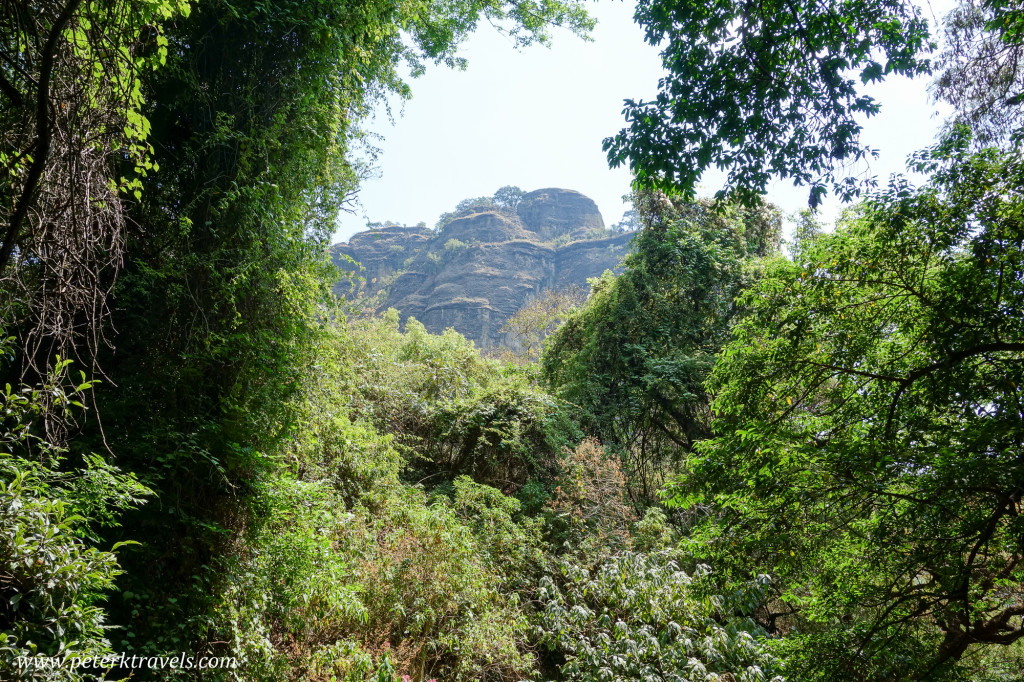 I kept my eyes open for Coatis — small, raccoon-like animals that were supposed to be all over this park.  I’ve wanted to see some in nature for a long time, so I was excited about the possibility or running into them.  On the way up, I saw no signs of them. 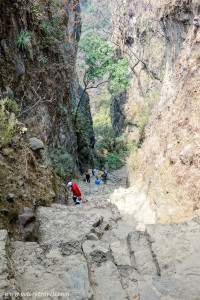 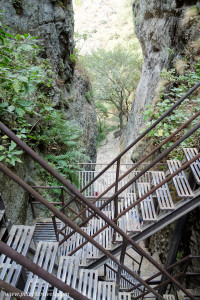 As I got higher, the path became a bit steeper.  At one point, you reach an actual metal staircase that you have to go up — one staircase for up, one for down.  There was no other way to climb the sheer walls at this point.  After the staircase, you are close to the pyramid — so very close.  As you finally come up over the edge, you are directly below the pyramid.  At the top is a small station where they charge an entry fee (I can’t imagine doing that climb as my commute to work every day), some bathrooms, etc.  I believe the fee was $50 pesos.  It ended up taking me about 40 minutes to get to the top.

I took the above photo almost as soon as I reached the top — no one was climbing on the pyramid, so it was a good time for a photo.

The small Aztec pyramid is dedicated to the Tepoztecatl, a god of the alcoholic pulque beverage.  It seems to date from 1450-1500 AD or so, depending on which source you read.  The view, is of course, fantastic. 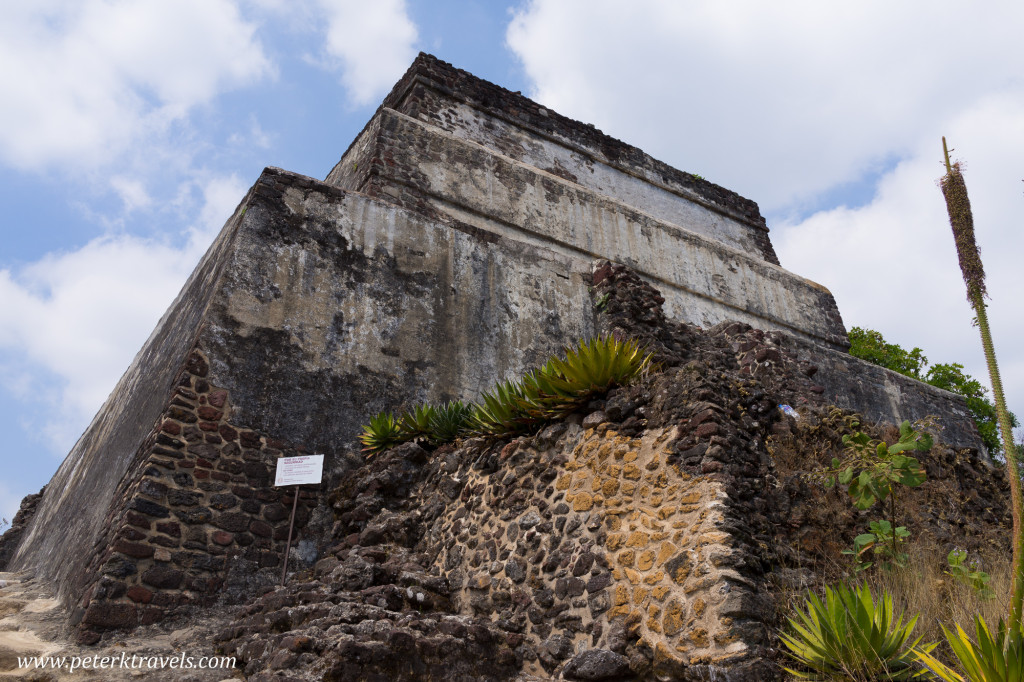 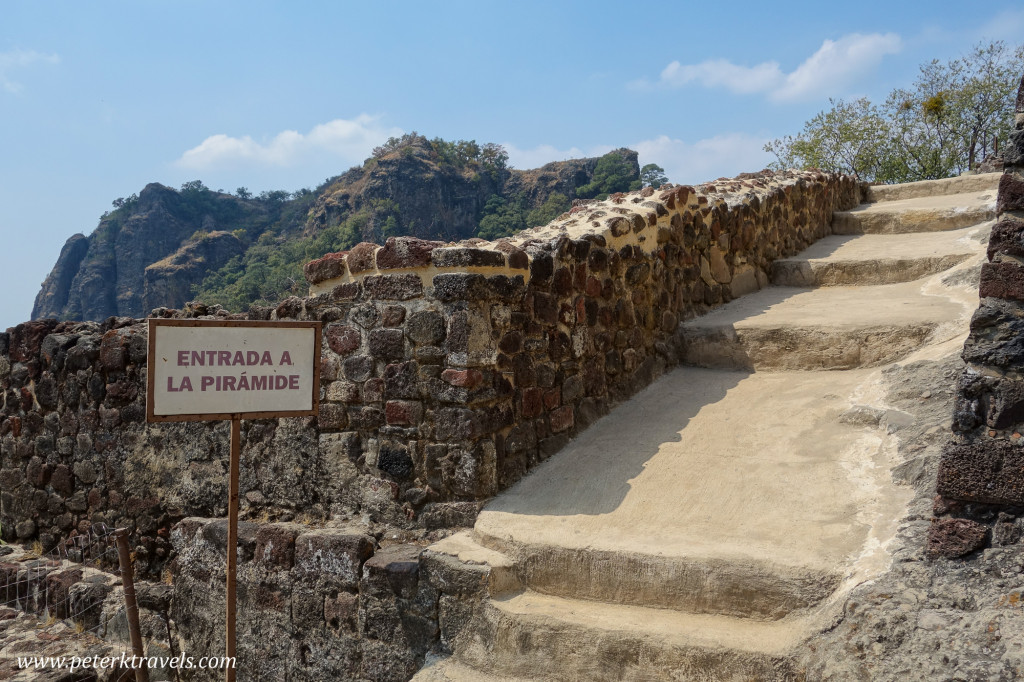 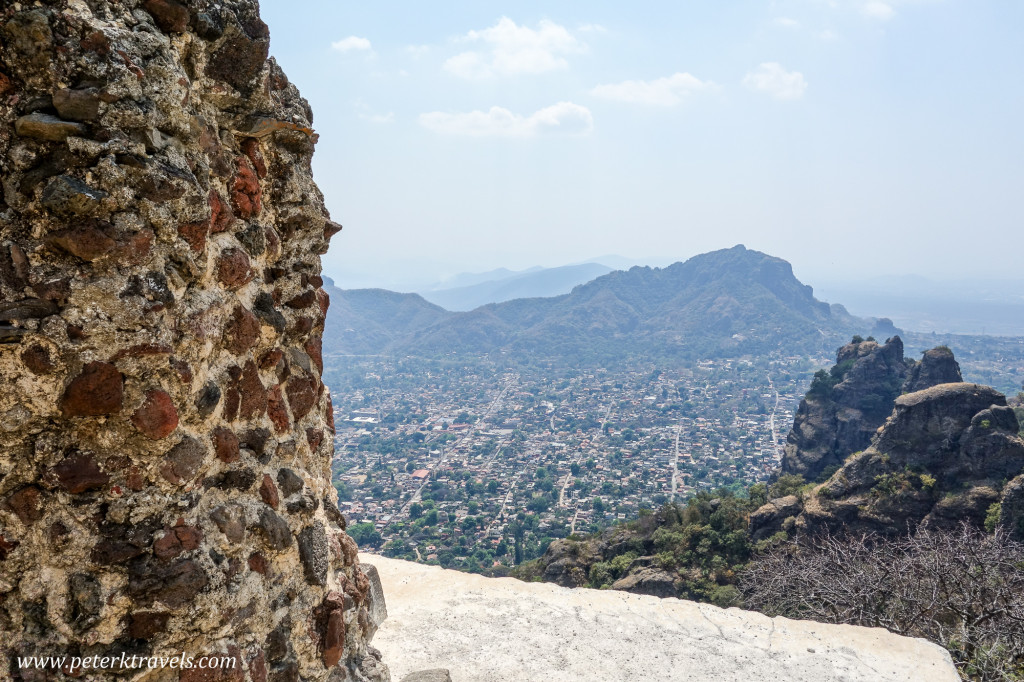 Around the temple, there were plenty of signs warning not to feed the Coatis: 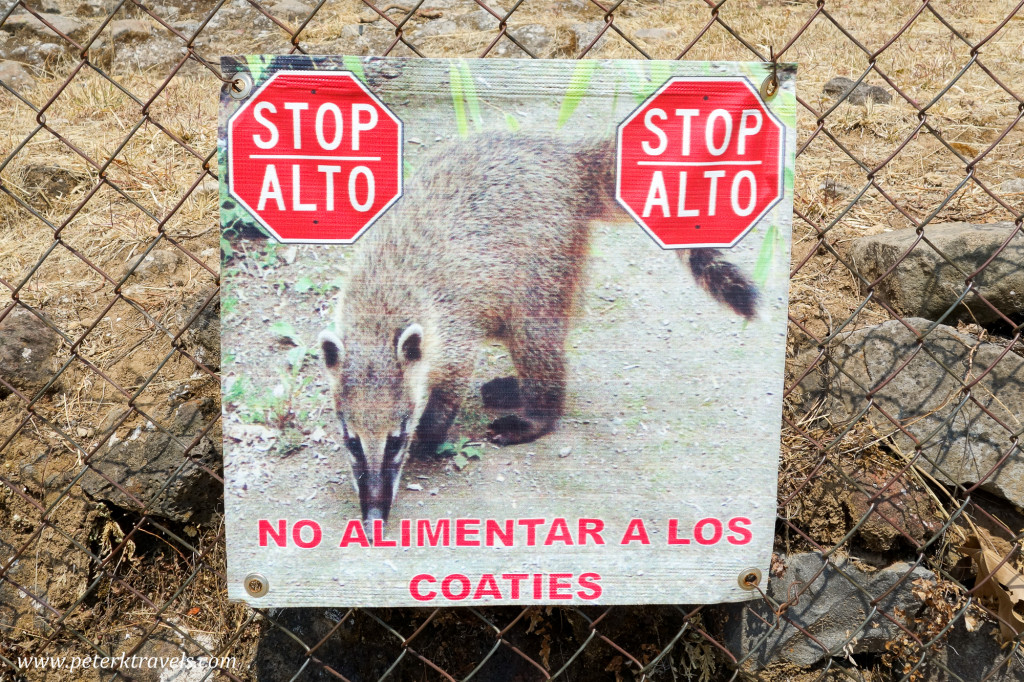 I spent some time sitting on top of the pyramid, taking photos, and checking out a few carvings on the walls.  The pyramid itself is small, it only takes a few seconds to climb up.  After the pyramid, I also walked more through the land nearby, but I never did see a single Coati.  I was surprised — in reviews and photos, they appeared to be everywhere.  Oh well.

When I was ready to head back down, I took a few more shots of the Pyramid.  It hangs very close to the edge of the cliff: 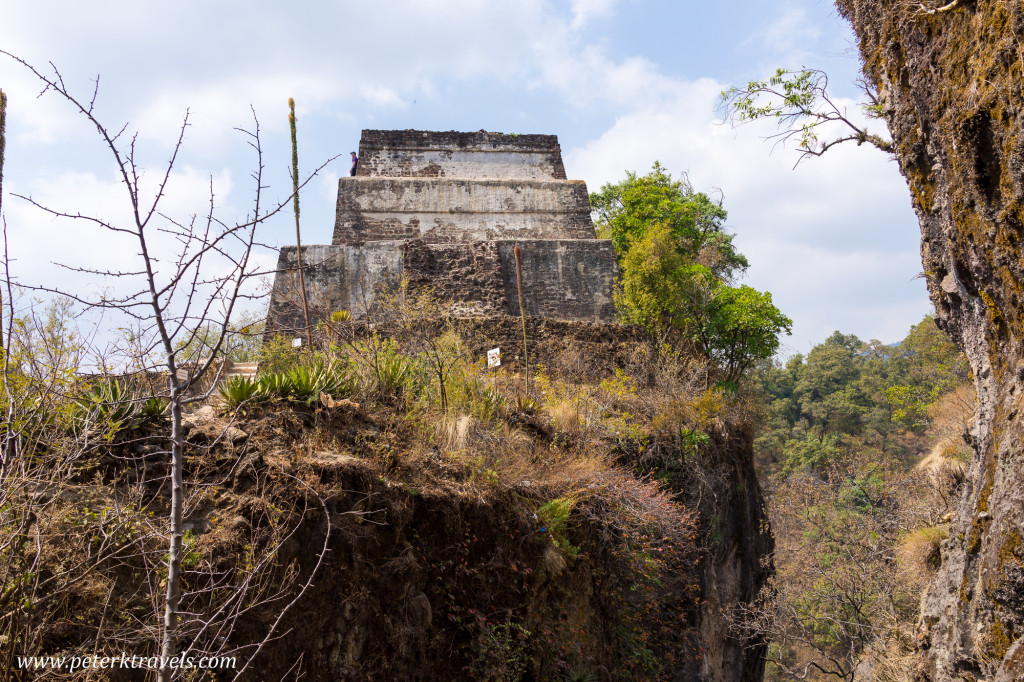 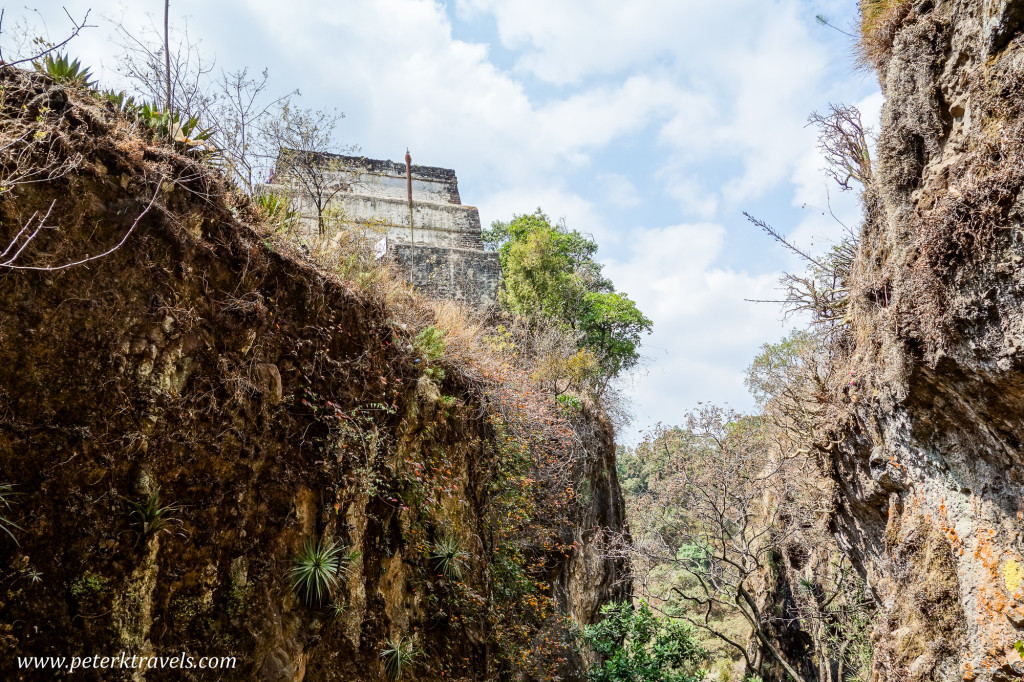 The way back down took me almost as long as up!  I passed a few other climbers on their way up, and chatted with a few of them (I ran into one of these climbers several hours later after he had come back down — his comment — there were Coatis everywhere.  And he had photos to prove it.  So where were they when I was up there?)

At the bottom of the hill, I walked back the way I had come, and eventually stopped for a late lunch at a small comedor.  The set lunch of enchiladas, rice, handmade tortillas and a drink was $60 pesos — about $3.50 in US dollars at that time.  They were delicious! 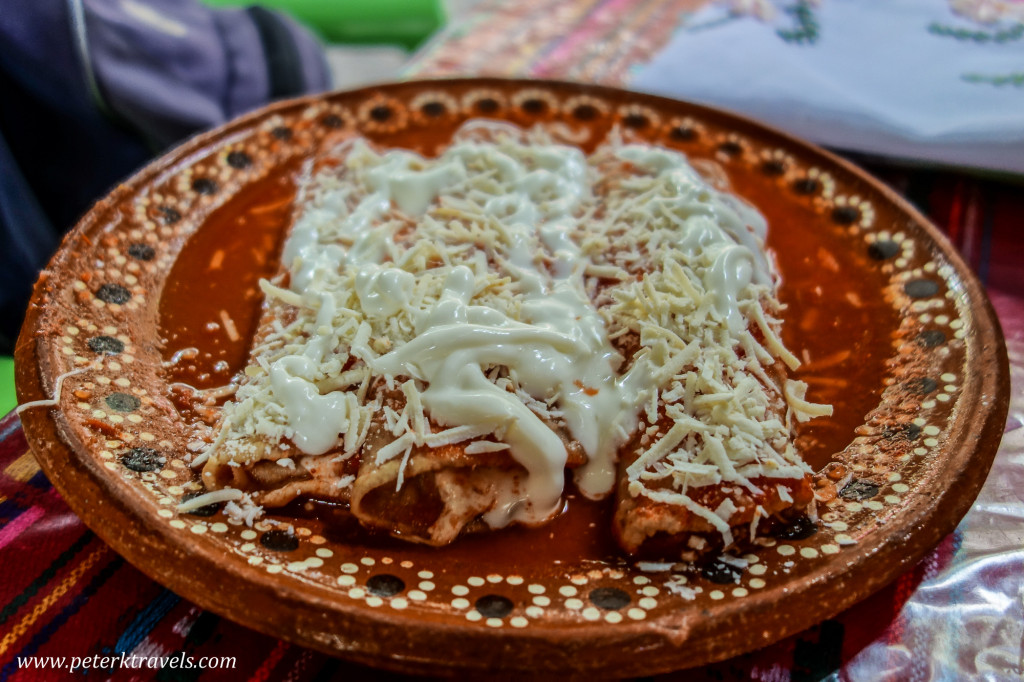 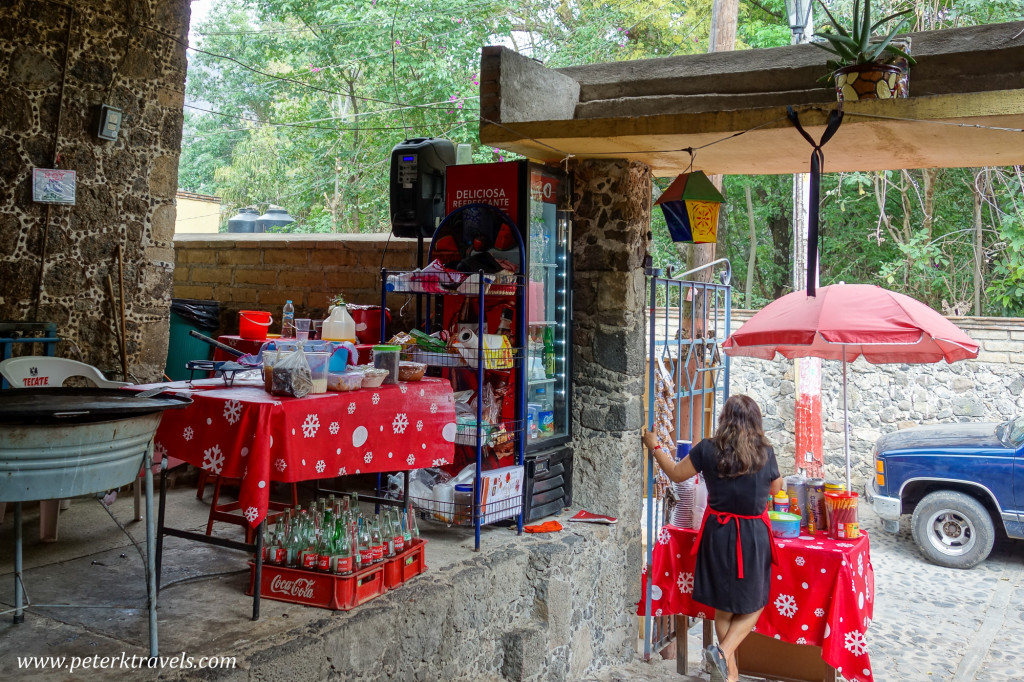 I spent the rest of the afternoon into the evening exploring Tepoztlán, another post and more photos will follow!

A Day in Izamal

2 Responses to "Climbing to El Tepozteco"