Mompós is often called a town that time forgot.  It was founded in 1537 on the banks of the Magdalena river in Bolivar, Colombia.  Mompós became an important port for goods being shipped upriver into the interior.  It was the site of a royal mint, and the gold and sliver trade flourished.  The silting and shifting of the river eventually left it out of the main channels and hastened its decline in importance.  Mompós retains its fine colonial churches and architecture, and it was named a UNESCO Word Heritage site in 1995.

People write of Mompós in such a way that you believe it is almost impossible to get there.  It is certainly not impossible, though it is somewhat grueling. I decided to set aside a few days from my trip to Colombia to venture to Mompós.

The night before I left, I had my hotel call the Terminal des Transportes and check on the bus schedule. I found that for 50,000 COP (around US $25), I could take a 7:30 a.m. bus that would drive to Magangue (~ 4 hours), then take a river ferry across to Bodega, then on to Mompós — total time, around eight hours.

Another option would be to take a bus or colectivo to Magangue, which takes four hours.  You can then take a “fast boat” (Chalupa) to the town of Bodega, and then a shared cab or moto-taxi on to Mompós.  This might save you an hour or more, as the fast boats travel much more quickly than the ferry.  However, I was looking for something easy — get in a bus, and get out at my destination.  So I chose the direct option.

I arrived at the Terminal des Transportes and bought my ticket.  The bus ended up being a smaller bus, but it did have a bathroom.

The four hours to Magangue were pretty uneventful.  Magangue itself was a busy, hectic, hot, port city.  I was pretty glad I didn’t need to arrange river transport on my own.  As it was, the bus went through town and then stopped at the ferry landing, where we waited to board a ferry.

We had to exit the bus before it boarded the ferry.  This makes sense, if the ferry sinks, no one wants to have to get out of the bus (in fact — they park the vehicles so close together even opening the door would be trouble).  I went to the top deck of the ferry, where there was a great view of the river.

The trip itself was pretty boring…maybe 45 minutes to an hour of plugging along, upstream.  We were able to sit in the shade, and there were a couple of hammocks to doze in.  A lady was cooking food, but no one seemed to buy anything.

As we got close to Bodega, where we would go back ashore, we passed another ferry.  This one was headed in the opposite direction, and was nearly empty.  It was much taller — the view from the top would probably have been fantastic!

Bodega was a dusty dirty place that seemed to exist only for the ferries and associated taxis to take people further on.  There were some food stands, and also the faster boats were docked there waiting for passengers.

The last hour or so of the journey was a very bumpy ride from Bodega to Mompós.  The road was nice in places, and completely gone in others.  There were pigs and cows in the road as well, so it made for a slow journey.  Alongside the road, it was generally very green, with lots of water around. 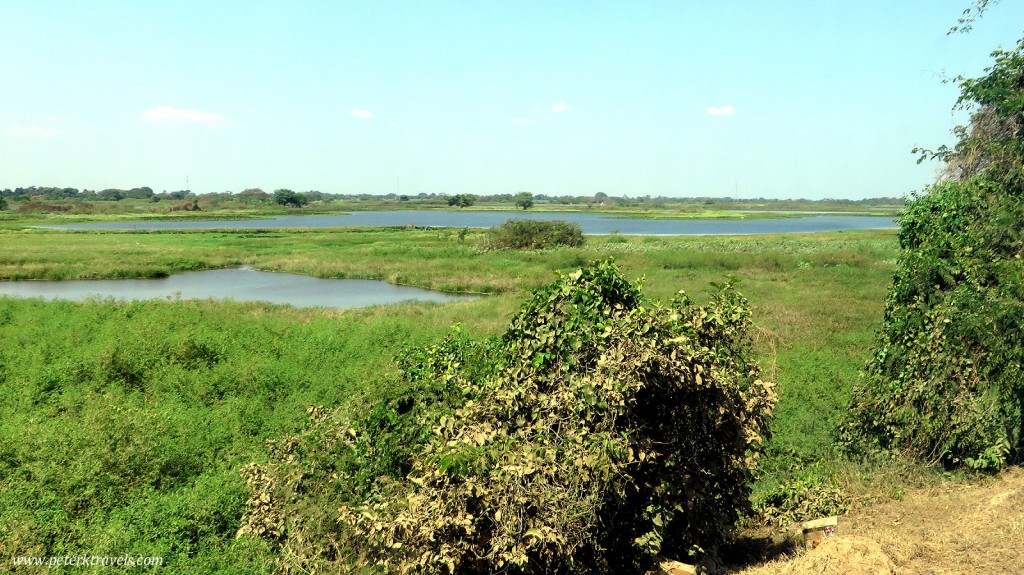 The bus rolled up in front of my hotel in Mompós after about seven and a half hours — somewhat early!  It wasn’t the worst ride ever, though it was long.  The bus wasn’t full, and the seat next to me was empty.  So I had room the stretch out.  It was air conditioned, and mostly comfortable.  The last section was very bumpy, but it was tolerable.

I reversed this on the way back, and it wasn’t as nice.  That bus left at 5:45, which made for a very early morning.  Outside of Magangue, we stopped to take on passengers from another bus which had broken down — filling the bus.  Shortly after that, the air conditioning died.  That ended up being a long four hours — more grueling than the trip down.

Ultimately, you need to set aside the better part of a day to get to or from Mompós from Cartagena.

A Couple Days in Mompós

A Trip To Cartagena, Colombia