Our summer of 2022 trip took us to France, where we visited Paris and Brittany.  We made a slight detour to Le Mont Saint-Michel, which is perhaps technically in Normandy but right on the eastern edge of Brittany.  We had spent a few days in Paris before taking the high-speed train to Rennes, where we picked up a rental car.  The drive from Rennes to Mont Saint-Michel was only about an hour.

Prior to our trip, I checked whether there would be a full moon during our visit, and whether it would be possible to photograph it with the Mont.  I found out that there were going to be two mornings where the moon would line up with the Mont, and when the moon would be full or nearly full.  One morning, it would still be quite dark.  The other, the moon set around the same time as sunrise.  Having never been there before, I wasn’t sure if the darker morning would work, but I decided to book two nights in the area so I could have chances for both mornings.

Taking a photo of this nature works best with a very long lens.  I decided to bring my Sony 200-600mm lens with me.  This is not a lens that is particularly easy to carry, because it is quite large.  It came along with me on the plane as a personal item.

It’s also important to figure out where you need to stand to see the moon as it sets.  I use a tool called The Photographer’s Ephemeris which allows you to set a pin where you intend to stand, and it will show you the sunrise, sunset, moonrise, moonset, etc.  After spending a few minutes,  I realized I’d need to stand northeast of the Mont, in a location which was about 30 minutes away from my hotel.  The red pin represents where I’d stand, and the dark blue line shows where the moon would set.  From that spot, I could line the Mont up with the moon. 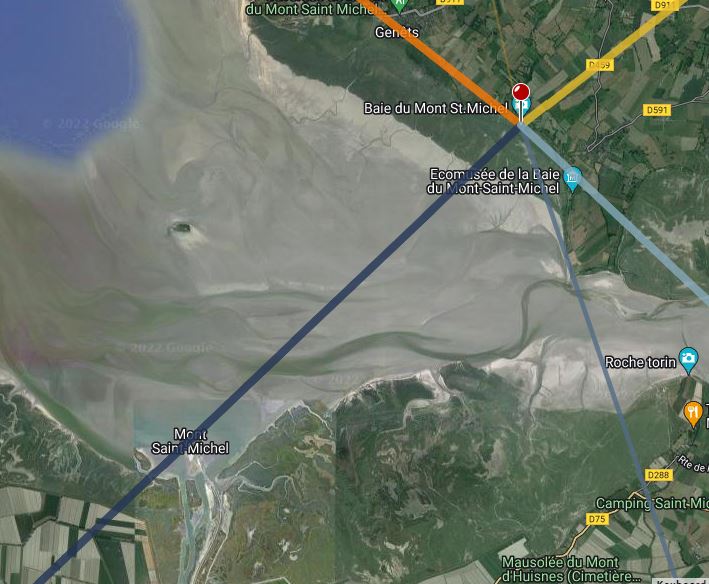 The following morning, I did the same thing.  This time, moonset was nearly an hour later, so I didn’t need to get up as early.  Plus, an hour later, there was far more ambient light.  When I arrived, the moon was very bright and the conditions were clear, just perfect.  However, things didn’t line up so well and there was nowhere I could drive to that would put me in a better position.  I was able to walk along the edge of a marsh and get things lined up.  As the moon dropped in the sky, I moved with it to keep it aligned with the Mont.  A beautiful pink light was in the sky as I took this photo, right around sunrise: 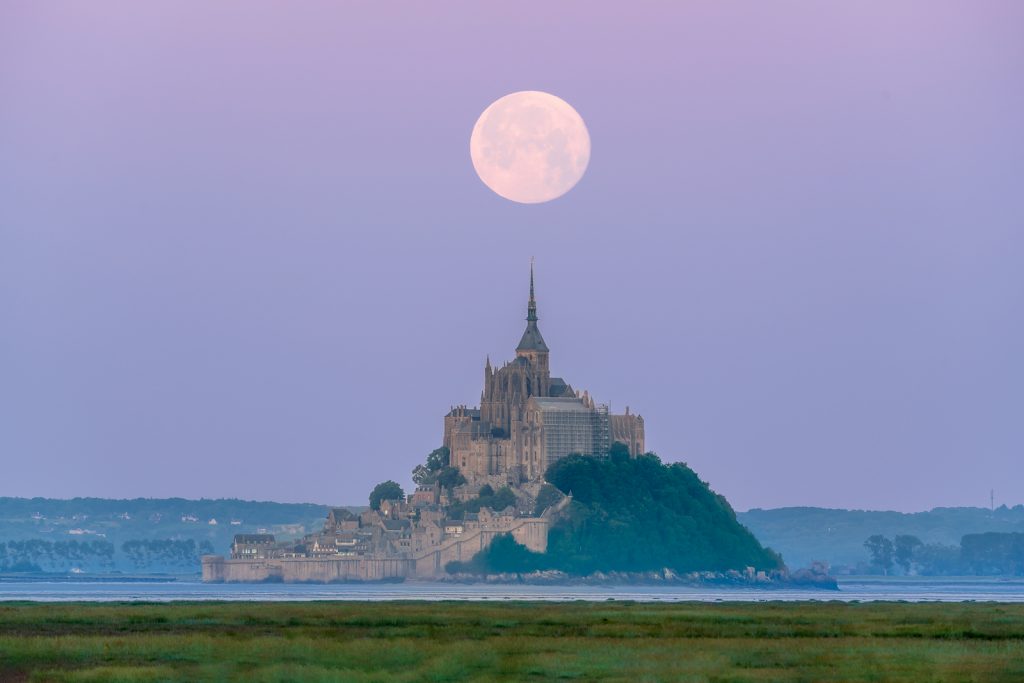 I was elated that I was able to get this and a few dozen other photos.  The chances of success for photos like this are quite slim, often clouds or other weather get in the way.

Stampede at at Le Mont Saint-Michel!