In February 2019, I took a trip to the Los Altos region of Jalisco, Mexico.  I was looking for someplace really off the beaten tourist track.  I’ve spent a lot of time in many of the more popular Mexican cities over the last few years, and I’ve always had a great time.  But, I needed something new.  I was flying into Guadalajara, so I looked for places within a couple of hours bus ride from there.

My first stop was Arandas.  There was a really interesting neo-gothic church there, Parroquia de San José Obrero, that I wanted to see.  I took a first-class bus from the bus terminal in Guadalajara.  I was a little worried that the bus might be full, as there weren’t a lot of departures.  Imagine my surprise when I was the only person on the bus!  We stopped briefly in Tepatitlan, where we picked up a couple more people, and then on to Arandas.

The bus terminal in Arandas is located on the western edge of town.  I walked four or five blocks from there to the Hotel HMS Express, where I planned to stay the night.  I asked for a room with a nice view of the church, and got one.  However, the view was of the back of the church.  I also wanted to be able to shoot a nice shot of the front of the church.  I had another hotel in mind for this — the Hotel Paris.  It appeared to be several stories tall, and had a rooftop deck.

I walked to the Hotel Paris just before sunset.  I was willing to book a room just for the use of the terrace, but they graciously let me use the terrace for free.  Atop the terrace was a large replica of the Eiffel Tower, which I was able to climb.  This gave me a fantastic view of the city and the church.  As the sun set, I realized I was going to be lucky, as there was a ton of color in the sky.  The church itself didn’t have many lights on it, but the front was illuminated just enough.  I think the resulting photo turned out very well! 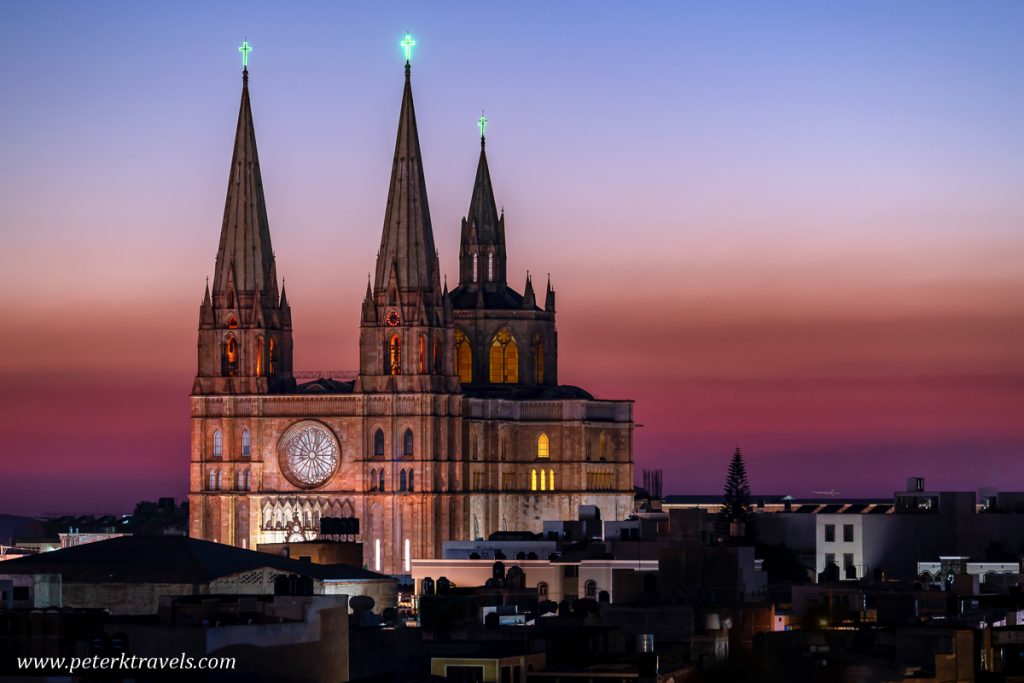 I’ll have a future post with some photos from the other side of the church.

Another View of Arandas

5 comments on “Sunset in Arandas”