Last year I visited Cholula in September, and came away with some great photos of the Iglesia de Los Remedios with the Volcano Popocatepetl.  In one photo, I got really lucky and captured a nearly full moon as well.  I have a minor obsession with this church and volcano and have returned to it regularly.

A few weeks after my visit last year an earthquake rocked the area and the church was damaged.  There’s a Youtube video of this happening.

I read online that this church would be a priority for restoration, because the large festival in early September is centered around it.

I decided to head back to Mexico a year after my last visit and see if I couldn’t get a photo of the church with the moon rising behind it.  I found the dates this would be possible, and they were near the end of September — perfect, as the festival would be over.

I found a hotel that had a rooftop I could shoot from, and it lined up with everything pretty well.  I booked it.  I ended up taking a 600mm lens with me, as I would need that length to get the photo I was after.

I arrived in Cholula to find that the festival — which I thought was over — was still going on!  A large white tent (“carpa blanca”) was erected in front of the church.  I asked around and was told that the tent could be there the entire month, even if the festival was over.  This was not good.

That evening, I climbed up on the roof and as the moon rose, I got the photo I wanted.  Sadly, the tent blocks the front of the church. 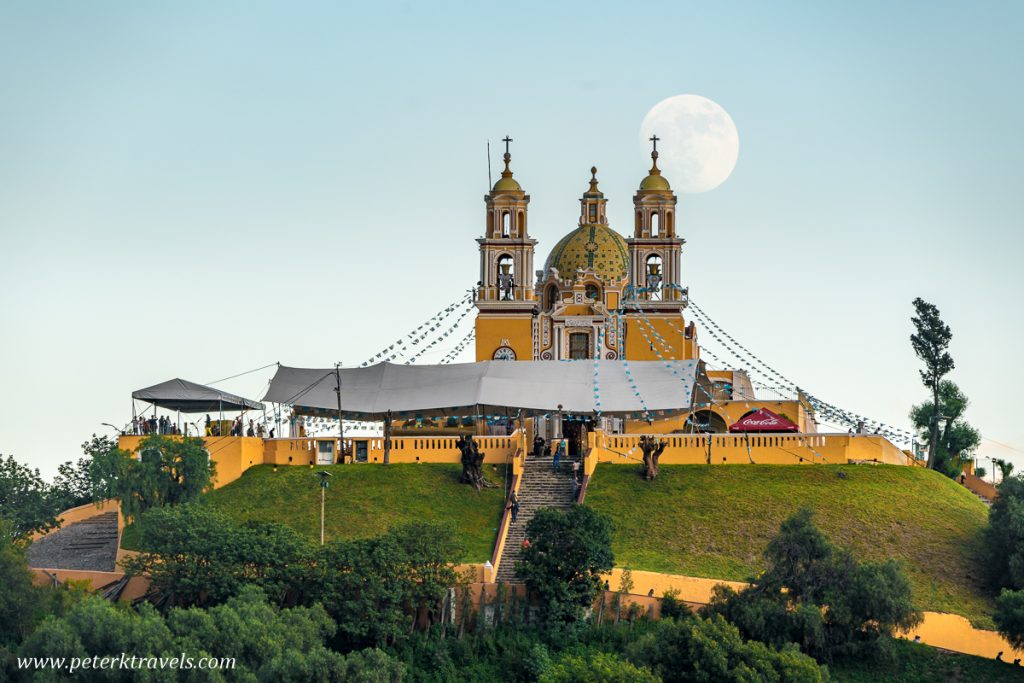 I tried to think of ways to incorporate the moon but not the tent.  As the moon quickly rose, I considered a silhouette photo: 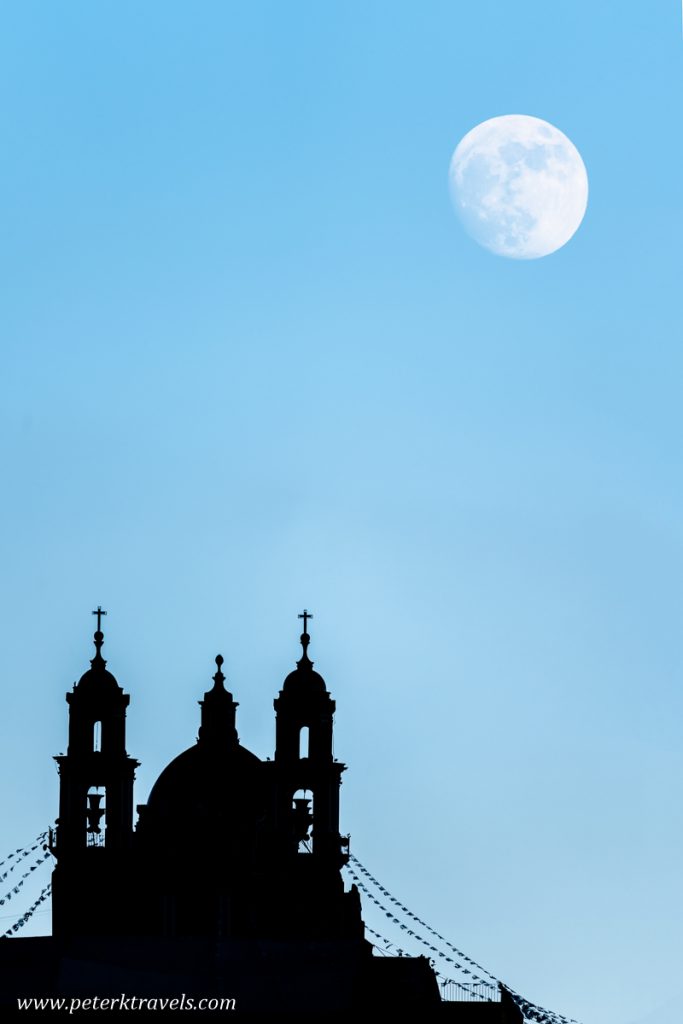 I had another chance the next night, but that tent was still there…

Day three, the tent was still around.  I resolved to leave the next morning, as the moon wasn’t going to be in position any longer anyways.

As the taxi drove me toward the bus terminal the next morning, I looked up, and the tent was gone.  I made a split second decision and went back to the hotel and stayed another night.  No, there would be no moon….but perhaps I could get a nice early morning photo.

The next morning, I climbed on the roof, and took a few photos.  Before the sun rises, there’s a period of 20-30 minutes where the sky is a deep blue, often called “the blue hour” (even if it doesn’t last an hour).  Here’s a photo of the church — sans tent — from the blue hour:

As the sky continued to lighten, some interesting cloud patterns became visible.  I took this photo with a wider view to incorporate another church dome:

I’m happy that I stayed around and got a few photos without the tent.  I do feel like I have some unfinished business, though, and I’m already eyeing up full moon dates in 2019 to see when things might line up — just NOT in September!