When I scheduled my trip to Taxco for February 2016, I knew I’d want to get a few good photos of the church there, the Iglesia Santa Prisca.  Completed in the 1750s, it is a symbol of Taxco and one of the finest examples of Mexican Churrigueresque style.

Prior to arriving in a new place, I like to do a lot of research.  I often like to take church or city photos at dawn or dusk, or during the “blue hour” which falls around those times.  The light at this time of day is often spectacular, making an ordinary photo extraordinary.  The downside is that you only have two small windows each day — you really need to pick where you’ll be exactly at the right time, and you may not get another opportunity.  Arriving in Taxco in the early afternoon, I knew I’d have that night, the following morning, and the following evening — only three windows into the perfect shooting times.

Looking at a map, and examining the topography, I figured there were three main ways to photograph the church: 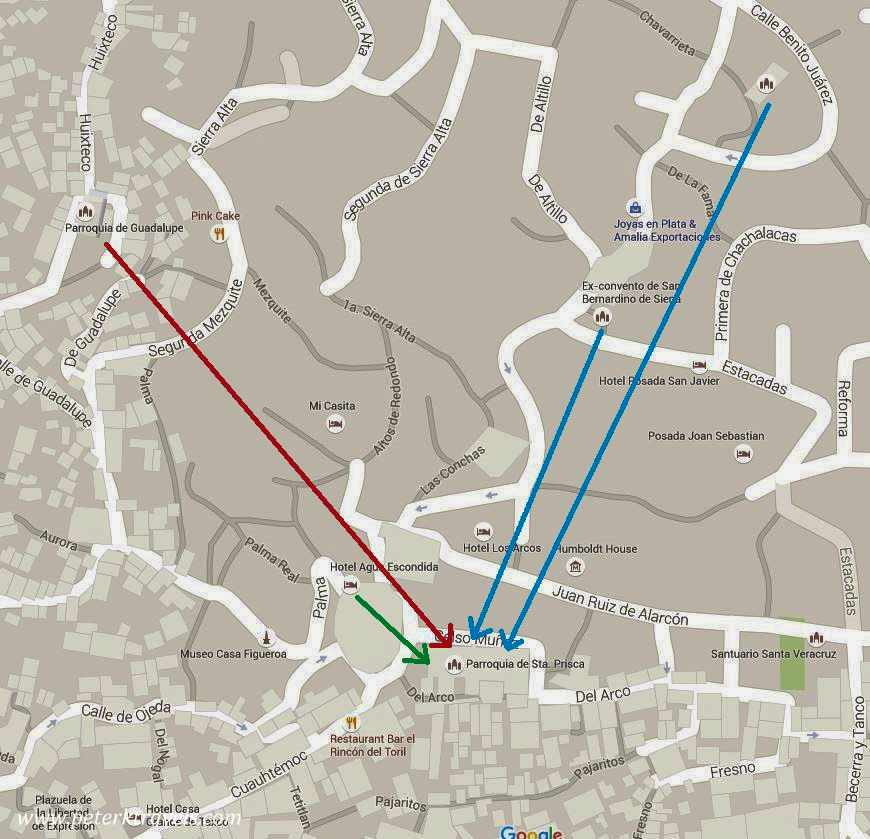 The first way to photograph the church was by shooting the front of the church from above.  The red arrow shows a possible way to take this photo.  The second option, the blue arrows, would be shooting the church from below in side-view.  The small green arrow is a closer-up shot from a hotel roof terrace.  The area to the south is very built up, and drops downward — this would make any view blocked by street-side buildings.

Using Google image search, there were clearly a lot of photos of this church, and many taken from the same angle — from above, with the church facing to the right, as imagined by the red arrow above.   I reasoned that there must be a public overlook or plaza that people were using.  Likely, it was the Parroquia de Guadalupe church.  This would clearly be a good place to station myself during one of my three windows.

Using Google Street View, I found what appeared to be the place, the plaza outside the Guadalupe church: 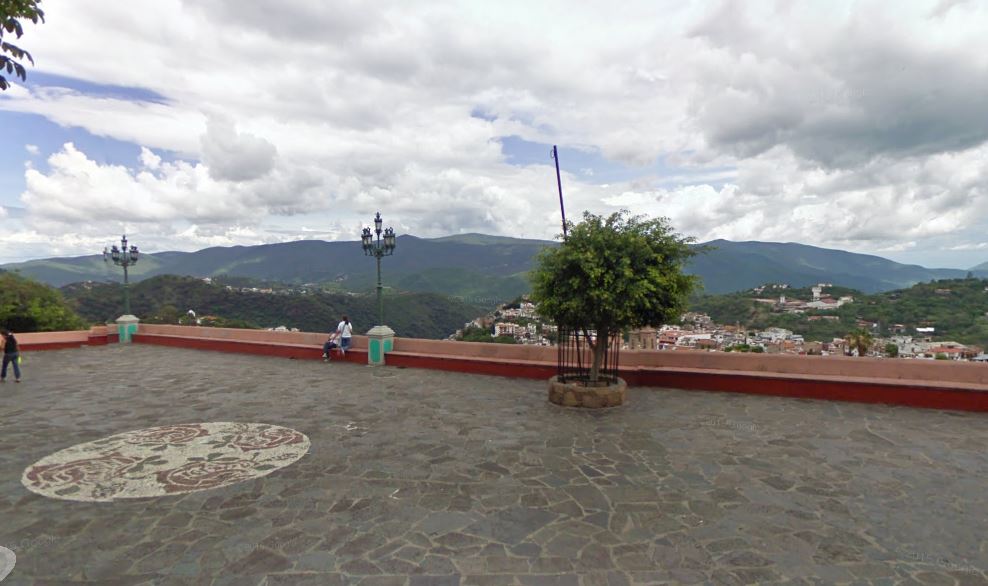 The church towers are slightly visible behind the small tree.  It seemed this would be an excellent place to start.

The second viewpoint, below in side-view, I could not find a suitable place using Google Street View.  I decided I would have to scout this in person.  It appeared there were two churches in line with this view, either might have a plaza or opening to take the shot.

The third viewpoint would clearly have to come from a rooftop.  I visited the websites of the hotels around the square, and found that the Hotel Agua Escondida had a rooftop terrace, and saw photos from the terrace that looked promising.  I decided to book that hotel — both because it seemed nice, and also for the potential photo.

After arriving in Taxco, a steep hike up the hill quickly verified that the Plaza Guadalupe would be the perfect place to shoot the church from above.  That evening, I hauled my tripod and camera up to the plaza.  Using an online “blue hour” calculator, I knew that I had from about 6:30-7:00 p.m. to get the photo.  I got set up and started shooting at the beginning of that window, and ended slightly after.  On that day, there wasn’t as much of a blue tinge to the sky as I would have liked.  However, the photos still looked good.  As it got darker, I extended the time the shutter was open, gathering more light.  I also played with the white balance, trying to get the perfect representation.  In the end, many of these photos came out quite nice.  For example: 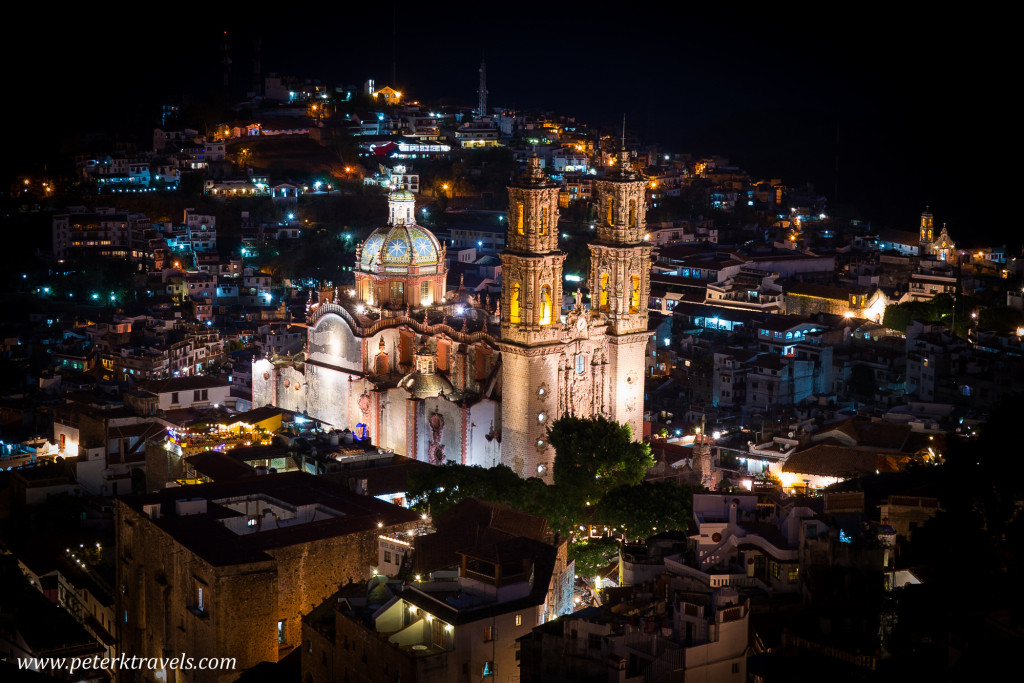 The above photo is a crop of a much larger photo.  Thanks to the tripod, it’s quite sharp.  And, I think the colors turned out well.

Earlier that afternoon, I had also scouted my second view, looking for an opening to shoot the church from a side-below view.  Neither church plaza panned out.  I ended up walking the road out-of-town, which dropped lower, but soon realized the buildings alongside the road were blocking the view.  Finally, I saw it — through the open door of a restaurant, a small balcony with an unobstructed view.  The balcony had a table on it, just enough room for a one-person lunch.  I decided to get lunch there, and took a few photos from the balcony: 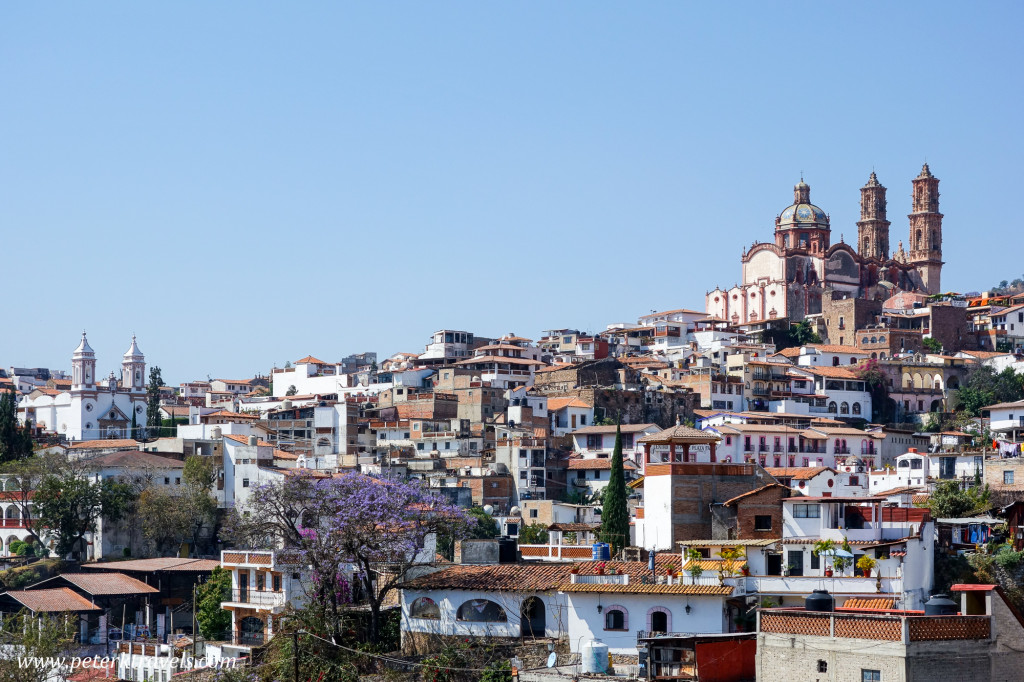 Although this was exactly the view I wanted, and I would have liked to taken this photo at dawn or dusk, it was not to be.  The restaurant wouldn’t have been open early enough the next morning, and I really wanted my last night to be a head-on shot from the hotel terrace.  So, this daytime view will have to suffice.

My second night, I stationed myself on the hotel terrace, set up my tripod and camera, and pointed it right at the church.  I hit the same timing window as the night before, and this evening, caught a more blue light: 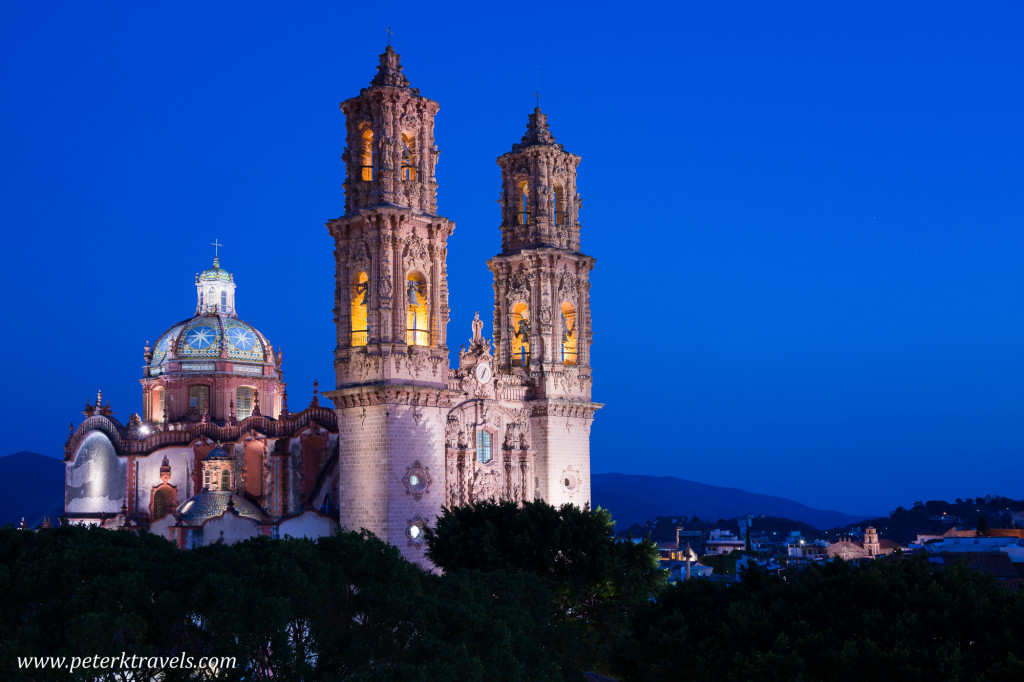 I was very pleased with this angle as well, and took more photos as it got darker, to the point where the background is nearly black: 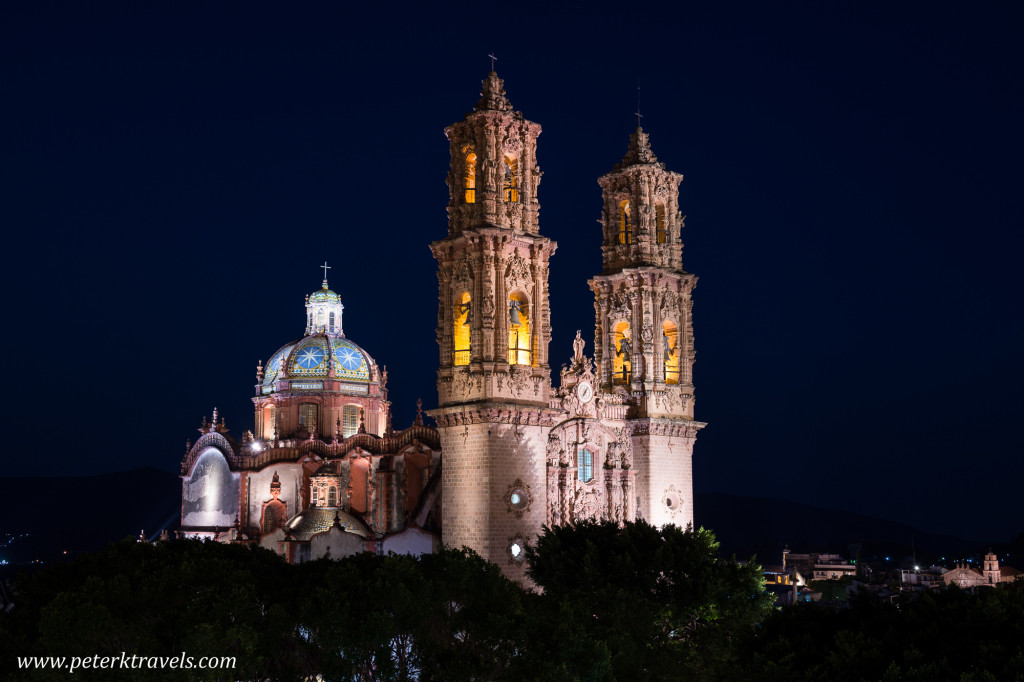 While I ended up very happy with the planned photos I took of the Santa Prisca church, there is always some serendipity involved with photography.  Walking a street below the Iglesia Guadalupe, I took this shot through a fence: 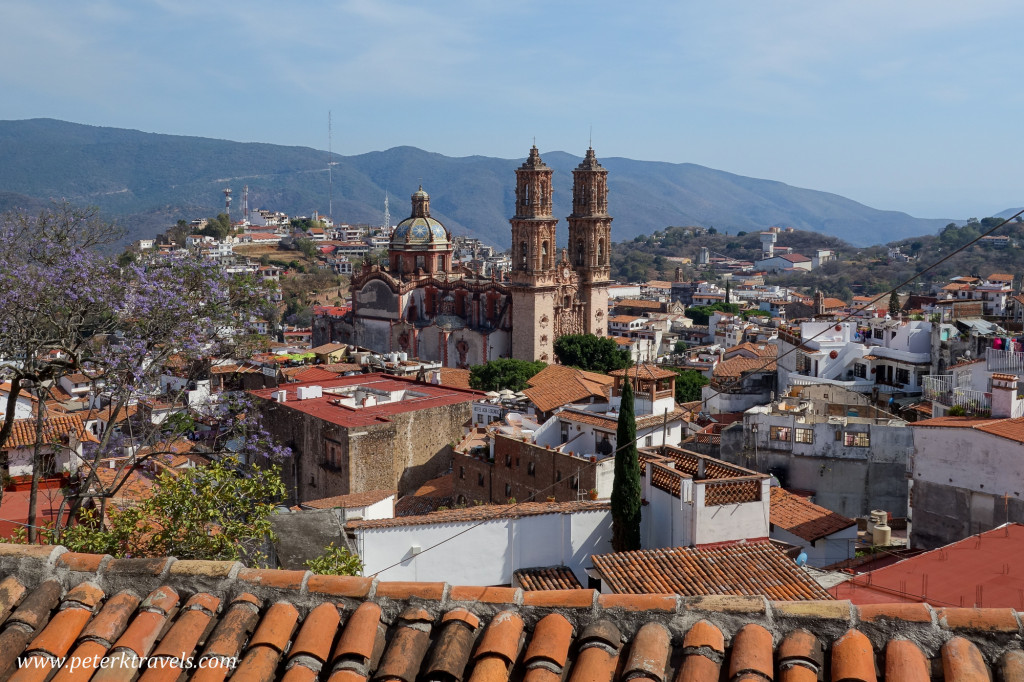 I love this view, particularly because I was able to put a nice tile roof in the foreground.  Had I been able to place a tripod here, I may have picked this view over the others for a sunset photo.  It’s not a common view, and probably would have really popped after dark.

One of my favorite shots of the church wasn’t just the church, but a friendly dog who photo-bombed me while I was scouting the Iglesia Guadalupe overlook: 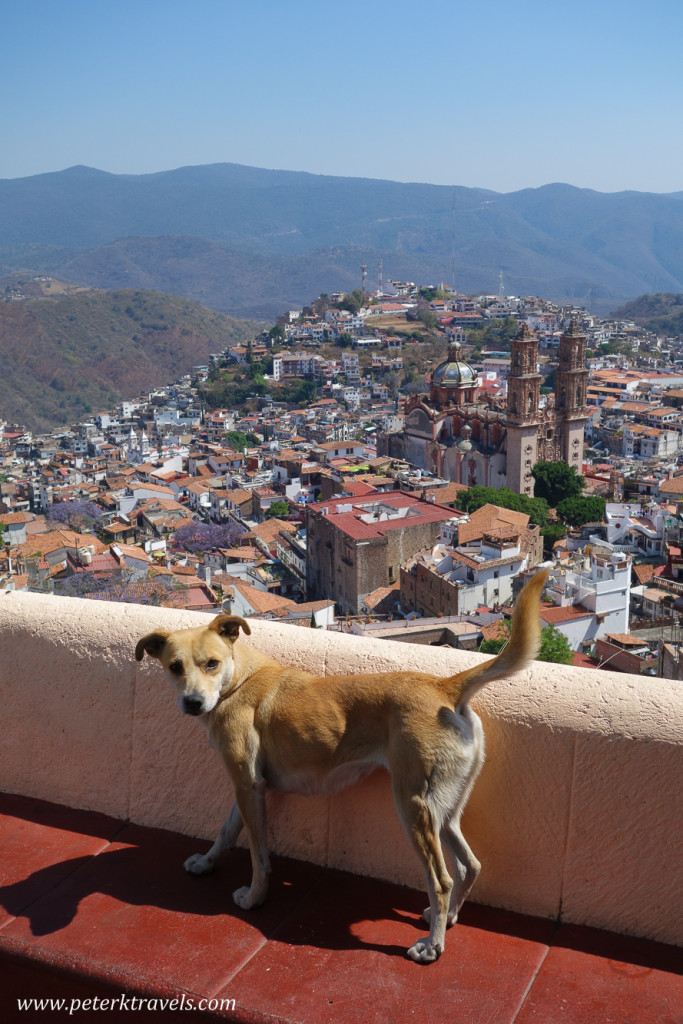 And last, a hand-held shot of the church with the park below, taken from the Hotel Agua Escondida terrace.  It’s not quite as sharp as some of the others due to being handheld, at lower light, but I love how the plaza unfolds below the treetops: 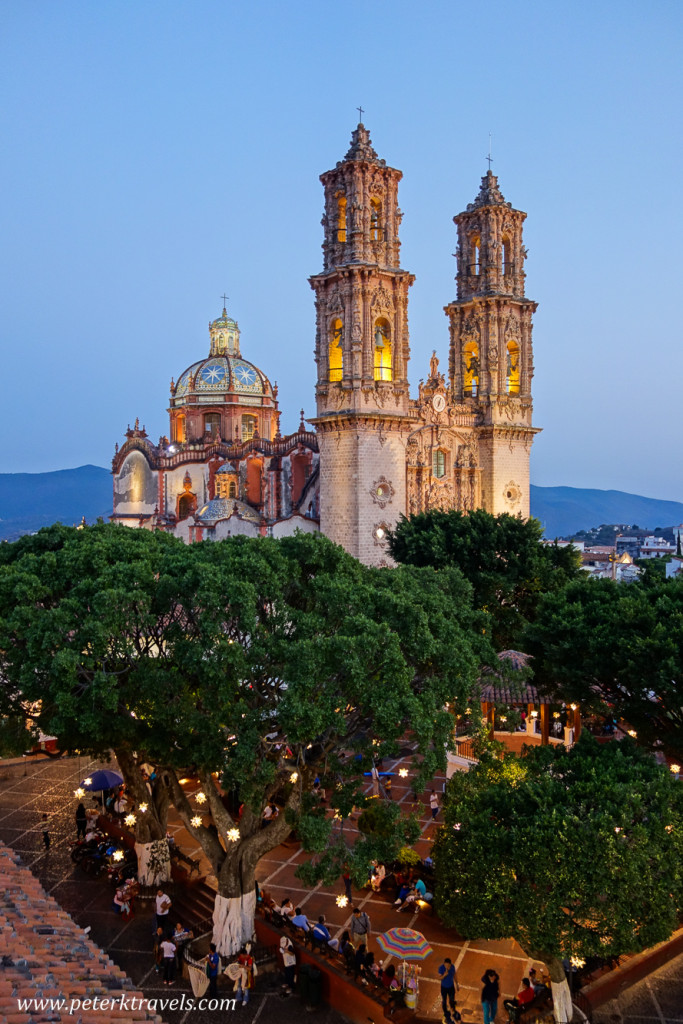 In the end, I really enjoyed photographing this church.  The research and planning out of potential views really helped me focus on the best approaches when I arrived, and I was able to accomplish what I wanted in the limited time I had available.  At the same time, I got some great shots that were unexpected.

Another Church and Volcano Photo