In April 2014, I visited the Mayan ruins at Mayapan.  While not as popular as the larger sites that everyone visits in the Yucatan — sites like Chichen Itza, Uxmal, Coba, or Ek Balam, it is an excellent site and worth the trouble to visit.

Mayapan is located about 50 kilometers south east of Mérida.  The entrance to the ruins is off highway 18, after the town of Telchaquillo.  Click here for a Google street view.

You won’t find a pre-packaged tour heading to Mayapan, so you’ll have to figure out how to get there on your own.  There are a couple of options.  You can rent a car, and make the drive yourself.  It’s an easy drive, but rentals can be expensive and come with other hassles.  You could pay a driver to take you, this may cost around $1,000 pesos to have the driver wait while you tour the site. 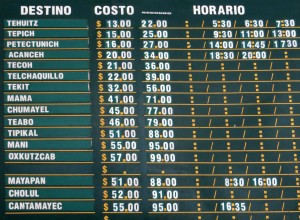 A third option is to take the public bus.  This is what I did.  The only buses that will stop at Mayapan are the second class buses.  Second class buses in Mérida can be caught at the Noreste station, located on on Calle 67 between Calle 50 and 52.  Be careful, there is a town named Mayapan as well, but it is nowhere near the ruins.  Be very clear that you want the “ruinas Mayapan” or something similar, so you don’t end up in the wrong place.  Another tip:  look at the schedule to the left.  If you are having trouble, ask for the bus to Telchaquillo.  That is the stop right before Mayapan.  Tell the driver you want to get off at Mayapan (something like “puede dejarme a las ruinas Mayapan?”) should work.  Our bus driver was nodding his head as I asked, he clearly had us figured out as soon as we boarded.

Second class buses generally lack restrooms, and are slow.  They stop everywhere.  The 50km ride took us an hour and a half — we did get to see a lot, but you must be patient.  The driver dropped us at the entrance to the ruins, we had to walk the last little bit to get there.  The cost to enter is around $40 pesos, not very high.  It’s a smaller site, and you may be one of only a few people there during your visit.

Mayapan was an important city during the Late Post-Classic period from the 1220s until the 1440s. Estimates of the total city population are 15,000-17,000 persons, and the site has more than 4000 structures within the city walls, and additional dwellings outside.

Here are a few more photos from the site.  Click the photos for larger images.

After our visit, we intended to stand out on the highway and catch the next colectivo or bus headed north.  Fortunately, there was a cab in the parking lot who was waiting on a fare.  He agree to drive us to Acanceh while his fare continued to tour Mayapan, which saved as a lot of time — though the cab ride ended up way more expensive than we’d hoped!  Click here to read about our time in Acanceh.

A Brief Stop in Acanceh