Cartagena de Indias is city on the northern coast of Colombia, facing the Caribbean.  The city was founded on June 1, 1533 by Spanish commander Pedro de Heredia.  It became a very important port city for the Spanish empire.  Gold and silver flowed out of Cartagena, and slaves were sent in.

During 2013, I became interested in visiting Cartagena.  The combination of beautiful colonial architecture, churches, and old Spanish fortifications piqued my interest. 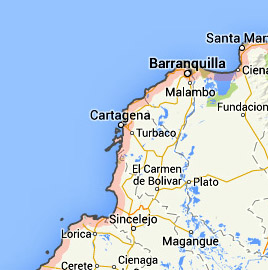 On Thanksgiving day 2013, I booked a ticket for early February on United to Cartagena, via Houston and Bogota.  Prior to leaving, I did a lot of research on what I might want to see, and even changed my plans slightly add more time, as I decided to head inland for a few days and visit Mompos, Bolivar, Colombia.

My flight left Indianapolis around 6:15 p.m., and I was in Houston a couple hours later.  The flight to Bogota left at midnight, and arrived around 6:00 a.m. Bogota time.  From Bogota, I then took an Avianca flight to Cartagena, arriving around 9:00 a.m.  This made for a pretty long travel day!

I enjoyed my week in Colombia, and I took a lot of pictures.  Over the next few weeks, I’ll be adding more detailed posts about various sights in Cartagena, plus posts about my side trip to Mompos.

To whet your appetite, here are some photos I took in Cartagena.