On my September, 2013 visit to Puebla Mexico, I visited many churches. Of all the churches I visited, I think the Templo San Francisco was perhaps my favorite.
The Franciscans began construction began around 1550, and the church was largely completed in 1570. The church was modified over time. The tower was added around 1730-67, and the present facade dates from 1743-67.

The facade features a grey stone portal, against a wall of red-orange tiles. Set into the facade are compositions of tile that have a floral motif. Some crosses and other religious symbols are also present. The interior is rather simple as compared to many other local churches, but it is set apart by being the final resting place of Sebastian de Aparicio.

Sebastian de Aparicio (1502-1600) was born in Spain, but arrived in Mexico in 1533. His background in ranching led him to round up wild cattle in the area, and he became the first Mexican cowboy, or charro. His experience moving cattle made him realize how much Mexico needed a road system. He constructed highways from Veracruz to Puebla, Zacatecas, Mexico City, and other places. Later in life, he became a Franciscan Friar.

Upon his death, he was so revered that his body lay in state for many days. He was exhumed after six months of burial, and it was found that the body had not decomposed. Two years later, it still had not decomposed. Based on this fact, and the over 1,000 miracles that were reported due to his intercession, Pope Pius VI beatified him in 1789 as Blessed Sebastian of Aparicio. His body remains on display in the Templo de San Francisco to this day. 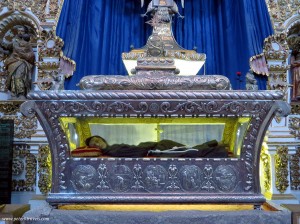 Interred in a small side chapel, the body of Sebastian of Aparicio lies inside a giant silver coffin. The sides are glass, enabling one to see the incorrupt body. Incorruptibles are those whose bodies are miraculously preserved after death, defying the normal process of decomposition. There are a steady stream of visitors here, who pray for intercession from Sebastian of Aparicio. He is known as a patron of drivers and travelers. Efforts are underway for him to be fully canonized as a Saint.

Here are a few more photos from the Templo. Please click the photos to see larger sizes.