I visited Campeche in September, 2012, when I originally wrote this piece….

The approach to Fuerte San Miguel is through a walled, curved pathway. The walls begin gradually, but are quickly taller than a man’s head. A wooden drawbridge doubles as the door, and spans a small moat. The curved entry path makes perfect sense, if you think about it. Whenever the enemy shows up to storm a castle, they always bring a battering ram to take down the front door. The ram, of course, requires a nice, long, straight path – both to bring it up to the door, and again when backing up to ram it into the door. The curved entrance reduces the potential size of a battering ram, and the momentum it could generate.

Fuerte San Miguel is in Campeche City, in a state that shares the same name, in the southwest corner of Mexico’s Yucatan peninsula. Campeche, for all its charms, is not on the normal tourist track. Getting there required a little effort – a flight to Cancun, a four hour bus ride to Merida, and then another two and half hours of bus ride before finally arriving in a modern bus station outside the city center. One could also fly into Merida, but the cost is much higher. 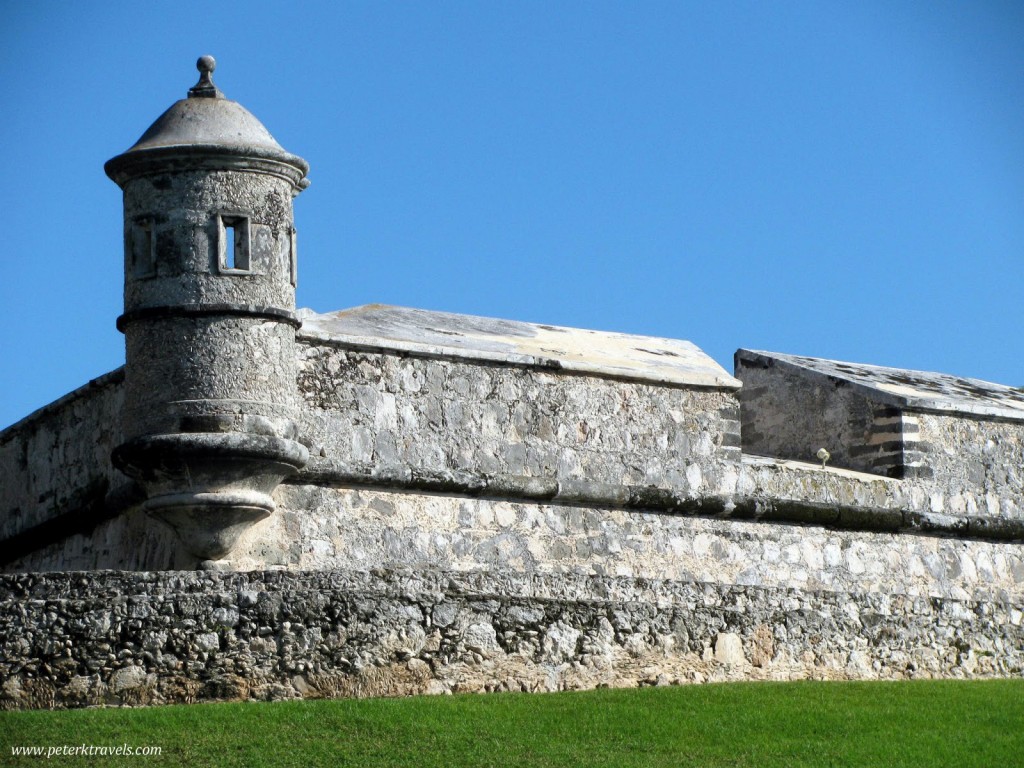 What Campeche lacks in normal tourist attractions like beaches and zip lines is made up for by its history – a particularly violent one at that. Spanish Conquistadors arrived in this area of Mexico in 1517. One can assume the local Mayan people weren’t terribly excited to see them (word travels fast). After a few false starts, Campeche was officially founded in 1540, by Don Francisco de Montejo. In typical Conquistador style, the city was founded on top of an indigenous Mayan settlement, named Ah Kim Pech. Campeche quickly became an important part of the Spanish empire. It’s natural harbor was extremely useful to the Spaniards, who used the port as a stopover for heavily laden treasure galleons hauling loot out of the interior of Mexico. Treasure, of course, attracts pirates, and that’s where the story gets more interesting.

A who’s who of 16th and 17th century pirates, including (Sir) Francis Drake, “Peg Leg” Parke, John Hawkins, and Laurent de Graff (“Lorencillo”) took their turns attacking Campeche. The unfortunate residents suffered through a century and a half of burning and pillaging. By 1663, the King of Spain had had enough, and it was decided to enclose the city within fortified walls, to better protect the city.

The city was enclosed within a hexagon shaped system of walls. The walls were anchored with defensive positions at the corners, called baluartes (bastions). There were also a series of gates leading into the city, including one that terminated right at the ocean. Ships were able to pull close and disgorge cargo, all under the protection of cannons.

To the north and south of the city, along the coast, two forts were constructed on high ground. The forts could provide early warning of attack, and had cannons to defend the approaches of the city. Fuerte San Miguel is slightly south of the city, built on a hill which overlooks the sea. Construction started in 1771, and the fort was complete by 1801.

We were the first tourists to appear at the Fuerte that day. We arrived early, knowing it was going to be hot. Campeche is a hot place. We happened to be visiting in September, when it is even hotter than normal. The day of our visit topped out at 97 degrees, which turned out to be an all-time record for that particular day. Adding in the humidity, the heat index topped out at close to 115.

That morning, we shared the Fuerte with a ticket seller, an elderly security guard, and a black and white cat. The cat could be found on the second floor of the Fuerte, meowing loudly. Though it seemed there would be good mousing at the Fuerte, the cat appeared hungry. A group of European tourists showed up a little later. There was quite a commotion when one tripped over a cobblestone and fell.

Atop the fuerte, rusty canons were poised at the ready, sighted out over the bay. However, the only infiltrators present were a troop of iguanas who were sunning themselves on the grass in the moat. They came and went via a drain in the moat walls. The views were spectacular. One could imagine a sentry standing and watching the horizon for signs of pirates.

The Fuerte now doubles as a museum. Funerary relics from local Mayan graves have been exhumed and placed on display. Pottery, jade, and other pieces are available to view. The Fuerte is an excellent place to spend an hour or so. It can be reached by city bus, but you’d have to walk up the steep hill. Better to take a cab, which can drop you at the entrance for around $40 pesos from the downtown. On the way back, walk down the hill and catch the bus at the bottom of the hill back to the centro.

The Two Forts of Campeche